Early last year (even before we knew it was going to be “2020”), I struggled with both my devotions and prayer life. I frequently found my mind wandering as I read the Scriptures in the morning. While I rarely missed my weekday readings, I frequently had to restart them because I hadn’t focused on what I was reading. Similarly, my prayers suffered, being brief or repetitive. I became discouraged about both of these, despite knowing that they are means of grace and that God will use them to bless me despite my failings and inadequacies. I suspect that many of you can commiserate with this struggle.

Around that time, I “accidentally stumbled” across a blog post written by the current pastor of our old church back when we lived in Oklahoma City. In it, he described his practice of writing out prayers based on Scripture he recently read. This resonated with me for several reasons. For one, Matt’s recent teaching through the Psalms, including ending with a prayer based on that week’s psalm, frequently focused on elements of praise, confession, and petition – all components of our own prayers. For another, our corporate confession at All Saints usually includes a prayer based on Scripture, sometimes from a prayer itself — like Solomon’s or Daniel’s. This pastor provided several suggestions for how to start this practice, most helpfully that one should keep it simple and not try to impress God with fancy wording! I started this practice over a year ago, and God has used it to richly bless me. While many approaches can be used, I’ll describe mine for your consideration.

I made this process a part of my morning devotions. After my reading (typically one chapter), I write single-paragraph prayer based on that chapter, using a dedicated journal (the picture is a typical example). 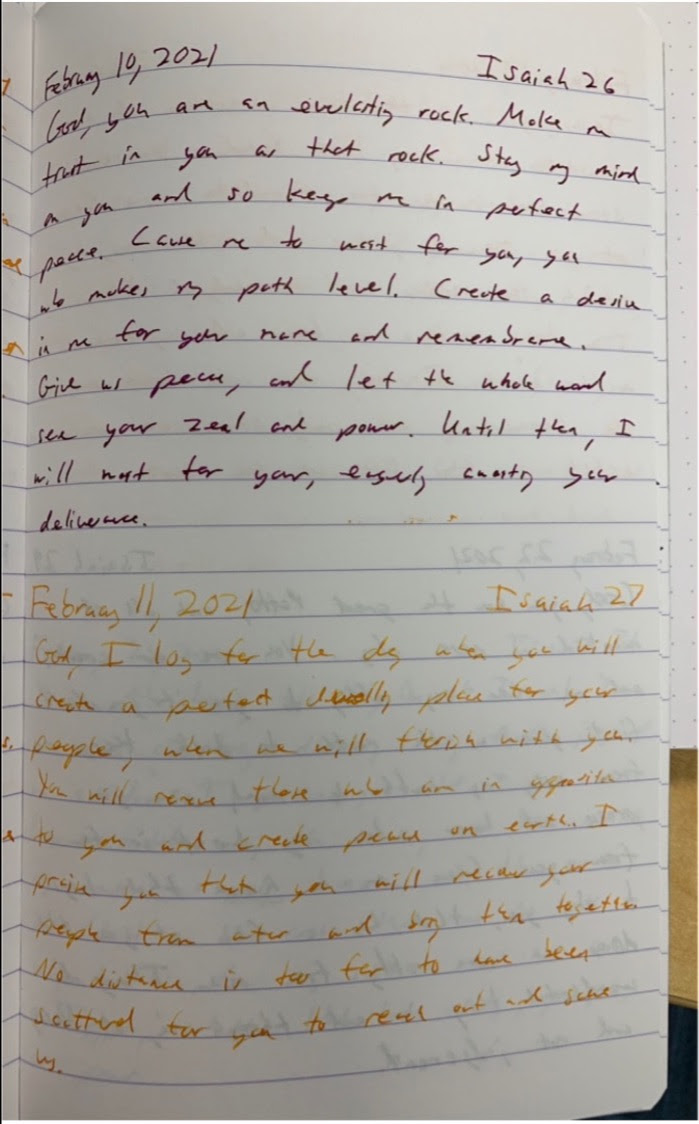 Usually, the prayer paraphrases part of the chapter, similar to our prayers of corporate confession. Sometimes, the prayer takes a larger view of Scripture but is related to the chapter (e.g., from a chapter in a prophetic book focused on judgement, I might thank God for redeeming me from the same judgement through Christ’s work). Occasionally,
I find myself directly quoting parts of the chapter as my prayer.

This practice enriched my prayer life and Scripture reading. When I pray later in the day in a less structured way, I frequently find myself repeating parts of the prayer I wrote earlier. Historically, I gravitated to narrative sections of Scripture for my personal readings. Now, I prefer poetry, prophecy, and the epistles, as they lend themselves to this practice. Importantly, thisprocess is a simple one. It requires neither a seminary degree nor a large amount of time. The blessings from doing so, however, are abundant. I encourage you to consider trying this practice, described by multiple people as “praying God’s words back to him.” I continue to be blessed by doing so and think that you will as well.

On behalf of the Session,
Chase

More in The Cure of Souls