All Authority and Power Are Given to Him (Matthew 8:1-17)

Note: Due to technical difficulties, we were unable to record the sermon on Sunday, May 17. Pastor Matt provided his sermon notes in lieu of the recording.

We have just finished the Sermon on the Mount, the first great discourse of Jesus in the Gospel of Matthew. Now, through most of chapters 8 and 9, Matthew will follow a simple pattern:

All but one of the miracles are miracles of healing. Matthew’s intention in this pattern is to reinforce the power and authority of Christ and his teaching and particularly to reinforce the message that the Kingdom of Heaven is at hand. Remember that Matthew’s Gospel is focused particularly on Christ our King and his coming Kingdom. The Sermon on the Mount was a sermon on Kingdom living. And we know and will see clearly in Matthew’s Gospel that the Kingdom of Heaven began breaking into this world during Christ’s first coming and continues to break into the world through the spread of the gospel until he comes again and establishes his Kingdom perfectly and forever. So, we are citizens of that Kingdom right now, and it is a Kingdom that is in some sense invisible because we cannot see it now as it will be. But it is also a Kingdom that is becoming visible as the gospel brings the dead to life and puts the Kingdom on display in the glorious power of that gospel. As we turn now from the Sermon on the Mount, let’s look at this King and see what he has to teach us about his Kingdom that is coming and now is.

Jesus’ healing ministry accomplishes several things. It is a fulfillment of Old Testament messianic prophecy, and so it shows him to be the Messiah. It is also a foretaste of the Kingdom in which all will be healed physically and spiritually, and it is a pointer to that Kingdom. Christ will say later in Matthew that casting out demons by the power of God shows that the Kingdom is at hand. So, Christ’s healing ministry and miracles are very closely associated with the Kingdom—not only showing that it is here, but also showing the character of that Kingdom - it is a Kingdom in which all things are beginning to be put right.

I.  Jesus Christ is the All-Powerful King (Believe Concerning God)

Every kingdom has a king, And the strength of the kingdom is found in the strength of the king. This morning, we begin to see in Matthew’s narrative Christ introducing himself as the completely sovereign King of this Kingdom. This is a Kingdom in which he has the power and authority to make things new. This is and will be a Kingdom where there is no more curse only because he, the King, has removed that curse. There should be no misunderstanding. Jesus Christ, our King, has all power and authority to remove the curse from his people.

In these three pericopes this morning, that power and authority are on shocking display.

Do you notice the faith explicitly present in the first two healings? The leper says, “If you are willing…" He knows Christ has the power and authority. The centurion says, “only say the word…" He knows Christ has the power and authority. Christ even commends the centurion to his disciples, saying he has not found such faith in anyone in Israel. We are called to believe in Christ—believe that he is the Son of God and that he has done all that is necessary to save us. Believe that he has all authority and power, and he exercises that power for our good and for his glory. He can heal you now. He will heal you in the last day! Will you believe this?

It does us little good if God has all authority and power but does not love his subjects perfectly. In someone with so much power, even small defects of love are magnified. But Christ’s love for his people is perfect. Look at how he interacts with these that he heals.

In two of the three healings, Matthew goes out of his way to relate that Christ touched the one he healed. Especially in the first instance, it is a great act of mercy. Touching a leper would make Christ ceremonially unclean according to the law, not to mention that touching the leper might expose Christ to leprosy himself. But instead of Christ contracting leprosy, the man’s leprosy was removed. Instead of Christ being made unclean, the leper is made clean. We serve a perfectly merciful King. He is ready and willing and eager to show mercy to his children.

We must pause here, though, and point out Christ’s relationship with those who are not his children. Falling in the middle of our passage today is a brief lesson that Christ gives on who belongs in the Kingdom and who does not. Don’t miss this—it’s a warning, and it highlights two things. First, in the Kingdom of Heaven citizenship is opened to every nation. When Christ speaks of many coming from East and West, he means the gentiles. This is good news for the gentiles! The gospel is for every nation. Second, the difference between those who are citizens of the Kingdom and those who are not is faith. When he speaks of the sons of the Kingdom being cast out, he is speaking first of those Jews in his day who rejected him. They were outwardly sons of the Kingdom because they were Jews, and as Paul says, to them the promises and the covenants were given. But because they lacked faith—because they rejected Christ—they were thrown out. They proved that though they were members of the earthly or visible Kingdom, they were never members of the heavenly Kingdom. Don’t miss this warning, because it applies to us as well.

Children, as you grow, you must make this faith your own faith. You must believe in Christ and cling to him. It isn’t enough that your parents believe or that you are a member of the church. You must believe for yourself and repent for yourself. Adults, the Scriptures are clear that some will prove they were never citizens of the heavenly Kingdom by falling away. John says of some in the church who left because of false doctrine that their leaving showed they never belonged in the first place. Others leave not because they are lured away by false doctrine but because they would rather enjoy their sin than serve Christ, our King. We see this on display when a member is caught in sin and refuses to repent and would rather continue in that sin than to repent and be restored—he willingly accepts excommunication from the church rather than turn from his sin.

There is a warning in this morning’s passage—do not miss it: Christ is perfectly merciful, but that mercy is reserved for his children. And we show ourselves to be his children by believing in him and repenting of our sins.

III.   The Gospel and this Kingdom are for the Humble and the Outcast (Believe Concerning God)

Look at the most prominent figures in these three healings. A Jewish leper—cast out of the camp, unclean and untouchable. A centurion—a gentile and the very symbol of Roman oppression, and it is his servant that Christ heals. A woman—not permitted even to provide witness testimony in a trial. It is no accident that these are the ones Christ is healing. Who is the Kingdom for? The poor in spirit. Those who mourn. The meek. Remember: Christ is not merely moved to compassion for a class of people who are down and out. It is these people that he has come to save! It is these who are invited to the Wedding Supper. It is these who will make up the citizens of the Kingdom of Heaven. And this message is good news—it is the gospel for all who are perishing. Have we forgotten how glorious this gospel is? Have we forgotten that spiritually, we are the poor and those who mourn? This good news is better than we remember. And it is not also for the humble and the outcast, it is first for the humble and the outcast. Is this gospel for you? Do you doubt that it is? Do you find yourself thinking sometimes that you aren’t worthy of it and don’t deserve it and wonder how could Christ save one like yourself? I have shared the gospel before with people whose answer to the gospel was that it was too good to be true—that they weren’t good enough people to receive it. But that is precisely who it is for! The gospel is for those who recognize their unworthiness. The gospel is for those who know they are sick and in need of healing. The gospel is for those who cannot afford to pay for it with money or good works. The gospel is for those who cannot make a defense of themselves before the judge of all creation. Are you a sinner? Then Christ is for you and this gospel is for you.

Sometimes I think we look at the better-known Christians in history, and we forget how badly they needed Christ themselves. We canonize them and mythologize them and enshrine them, but what made them great Christians was that they knew and never forgot how desperately they needed Christ. Martin Luther, famous for his almost reckless boldness and his dogmatic determination to cling to the truth of God’s Word, shook the world and turned everything upside down with the Reformation that he led. After his death, his friends found a scrap of paper in his pocket. Written on the paper were the words, “We are beggars. This is true." J. Gresham Machen, the founder of the OPC and Westminster Theological Seminary in Philadelphia, one of the only ones able and willing to take a vocal stand against the godless liberalism of the northern church in the early 20th century, unexpectedly took ill in December 1936, and realizing he would not live through the night on New Year’s Eve, he sent a telegram to his colleague, John Murray. In it was this single line: “I'm so thankful for active obedience of Christ. No hope without it.” Do you hear the humility in the dying thoughts of these two great men of the faith? Luther acknowledged that we are all beggars. Machen acknowledged that salvation is all of Christ, worked for us and not by us. They knew what great sinners they were, but of infinitely more importance, they knew how great a Savior Jesus Christ is. He is all powerful, perfectly merciful, and the Kingdom he has established is for the humble and the outcast.

Christian, rejoice in this Kingdom and this King—this King who has, in perfect love, gathered all of us outcasts together and made us his own. Believe in him, and cling to him through the storms of this life. In the Kingdom, it is eternal day, and in that place, death shall be no more, neither shall there be mourning, nor crying, nor pain anymore.

If you are not a Christian, if you do not believe in this Jesus, or are not willing to serve him as King—if you still think you can buy your way into heaven with your good works, just doing your best—humble yourself. Recognize that you cannot do anything to save yourself. You cannot do anything to make yourself a citizen of the Kingdom. All you can do is trust in Christ and repent of your sins. Acknowledge that you are sick and in need of healing, and the merciful Lord of our Kingdom will heal you. He stands ready, willing, and able to do it. 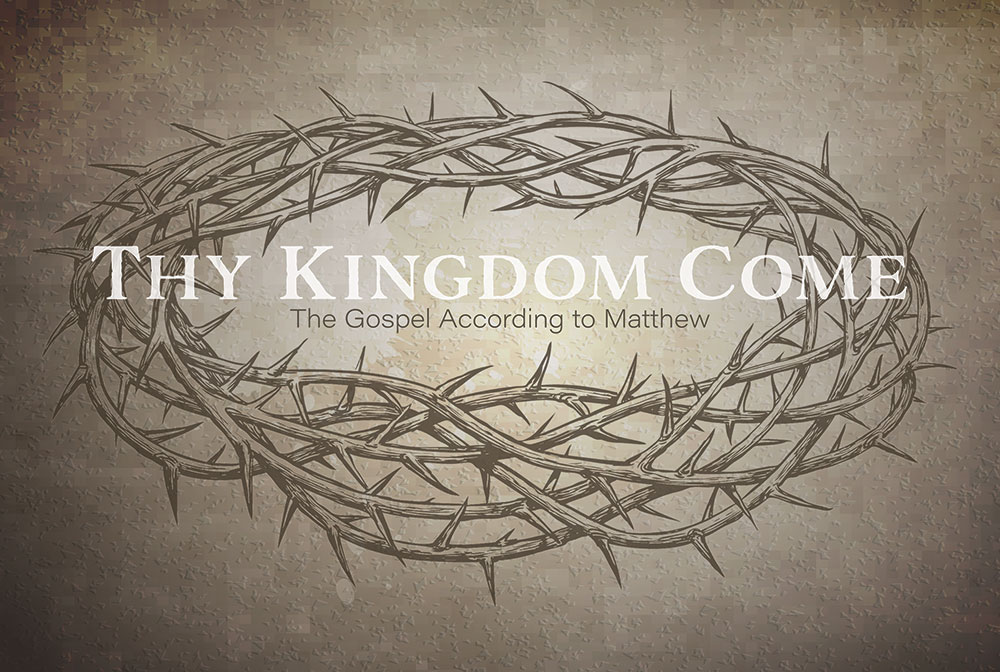